Winner of the 2005 PEN/Joyce Osterweil Award for Poetry

“The poetry of Yerra Sugarman functions something like a solar system—around a sun that is Beauty and constant, there moves a planet Clarity of Utterance, there are the planets History and Holocaust, and the twin planets Passion and Eye whose gravitational pulls keep it all in motion, then there is Music (a voice distantly related to a cello), and the planet Language (that like our Venus is the brightest of all), finally there is Decency, which is made of iron and has its own star. This extraordinary display in the literary heavens comes in a first book.” —Stanley Moss

“Yerra Sugarman’s powerful first book, Forms of Gone, reveals a rich poetic gift that is at once unique and eternal. The daughter of Holocaust survivors who settled in Canada, Sugarman transforms that difficult subject as the alchemist beats metal into gold. She writes of the impact of history on daily life, lifting the particulars of individual experience into universal truths.” —Grace Schulman, PEN American Center

“Forms of Gone is a powerful first book by a poet mature in experience and worldview, whose strength is drawn at once from a unique perspective and a multilayered engagement with the counterpoint of syntax and poetic measure. … [T]he daughter of Shoah survivors, … her subject is the overlay and undertow of history on daily life, as it regards that very specific experience, radiating out into a meditation on the palimpsest that is any examined human existence. But first of all, there is the reality she witnessed, as the witnesses themselves began to disappear, with a novelist’s (or a painter’s) eye for wry or heart-wrenching detail, but with a poet’s linguistic compression and invention, with a poet’s genius for recreating the particular so that it also implies the human universal.” —Marilyn Hacker 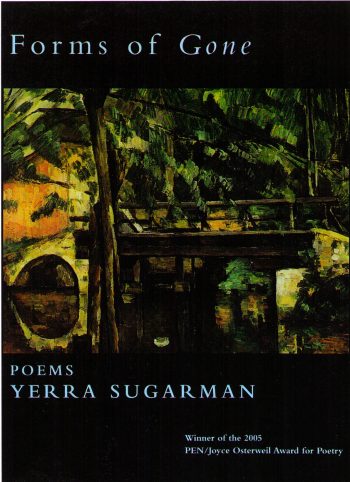